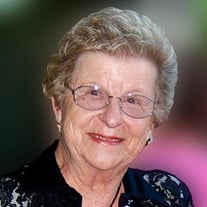 Ingeborg ("Peggy") Mendelsohn ("Oma" to many) passed away peacefully on April 16, 2021. She was 93. The daughter of Karl and Anna Stenzel, Ingeborg was born on June 26, 1927 in a village near Breslau, Germany, in what is now known as Wroclaw, Poland, subsequent to World War II. She was raised there by her parents along with her older sister, Hilde. Her father was a cabinet maker and her mother was a hard-working farm wife. The family grew up simply and lived off the land. In her very early years, she fondly recalled loving gardens and fruit trees, cooking with her mother, and her dog Della who lived in a doghouse built by her father. In 1939, the war broke out and Ingeborg worked hard to help her family with the harvest to survive and and earn a living. In 1941, at the encouragement of her mother, Ingeborg obtained an exception to be able to study to be a preschool teacher. She traveled 50 miles away from home to a boarding school to begin her studies at age 14. It was there when, in 1944, the region was overrun by Russian soldiers, and the residents, including Ingeborg's family were displaced from their homes and made to leave. Ingeborg was separated from her family for more than two years until finally reuniting with them again using Red Cross bulletin boards set up in each village to help refugees locate their family members displaced by Russian soldiers. In 1947, in the town of Hof, she met Paul Mendelsohn, a man of German Jewish descent who had fled Germany before the war and had recently returned, working in Nuremburg as a U.S. Army liaison with the Nuremburg War Trials. In a timeless story, evocative of romantic films of the era, they fell in love and were married on November 6, 1947, in which she may have worn a wedding dress made of parachute cloth. On January 8, 1948, they returned to America in a military transport plane by way of Idylwild Airport in New York. It was Ingeborg's first time on an airplane but she became the flight attendant because there wasn't one, and people were sick and needed help. Once in the United States, at Paul's suggestion, Ingeborg adopted the Americanized name "Peggy" and the two traveled across the country in a car they nicknamed "Johnny" from New York to San Francisco, where relatives of Paul lived. While she missed her family very much, she embraced and explored the United States, which was vast and unbelievable to someone from little villages in Germany. She fondly recalls discovering bananas for the first time shortly after arriving in New York. She and Paul eventually settled in Marin County to be near other family, where their two children were born and raised. Ingeborg lived her life supporting her family, including her husband and their children as well as her family living in Germany. She volunteered for numerous causes and could be spotted frequently in her garden or along walking paths all over Marin(and everywhere in between). Perhaps most importantly, as a result of her generally outgoing personality, she made holiday dinners and baking cakes and pastries for family birthday celebrations. Ingeborg's husband Paul passed away in 1985, and her sister Hilde, still in Germany, passed away in 2009. Despite her rough upbringing in Germany, she did not let that define her. She has a charismatic smile and moved through life with a positive attitude. Ingeborg has said she has had a good life , felt blessed, and always wanted to make a difference by helping others. She spent much of her life volunteering at hospitals and convalescent homes, and was always first to cook a meal or bake a cake for a friend in need. She particularly loved and gave to those at Trinity Lutheran Church, where she belonged for 69 years. Her family meant the world to her and she never failed to appreciate how close by her children and grandchildren lived. As a result, she also had a major role in helping raise her only grandchild. Later, she was delighted to have a role in in the lives of her great-grandchildren as well. She always spoke with boundless joy and pride of her children, grandson, and great-grandchildren and was lovingly called "Oma" ("grandmother")by her grandson, great-grandchildren and just about everyone else as well. She is survived in the United States by her daughter Susan, her son David, her grandson Sean, and her two great-grandchildren, and in Germany by her nephew Ulrich and niece Ingeborg, and great nephew Sebastian and great niece Birgit. In Ingeborg's honor, please nurture a plant or garden , indulge in a doughnut, make someone smile, turn a stranger into a friend, bake a cake for someone who is lonely, bring dinner to someone who is ill, take an early morning walk, and never turn down an opportunity to give big bear hugs. The family is thankful for the loving care given to her by Sherry, Ellen, Moreana, and Donna; and the incredible and indispensable Hospice by the Bay team, Lisa and Danielle. At Ingeborg's request, a public memorial will not be held, and the ashes of her and Paul will be scattered together. In lieu of flowers, donations are invited for the San Francisco-Marin Food Bank, the Marin Humane Society, Guide Dogs for the Blind, and Hospice by the Bay.

Ingeborg ("Peggy") Mendelsohn ("Oma" to many) passed away peacefully on April 16, 2021. She was 93. The daughter of Karl and Anna Stenzel, Ingeborg was born on June 26, 1927 in a village near Breslau, Germany, in what is now known as Wroclaw,... View Obituary & Service Information

The family of Ingeborg Waltraud Mendelsohn created this Life Tributes page to make it easy to share your memories.

Send flowers to the Mendelsohn family.